Arabic calligraphy has been used to a much greater extent and in astonishingly varied and imaginative ways, which have taken the written word far beyond pen and paper into all art forms and materials, For these reasons, calligraphy may be counted as a uniquely original feature of Islamic art, The genius of Islamic calligraphy lies not only in the endless creativity and versatility, but also in the balance struck by calligraphers between transmitting a text and expressing its meaning through a formal aesthetic code.

There are many scripts in Arabic Calligraphy, Which are:

Is one of the six Arabic Calligraphy Scripts, It was firstly standardized by the Abbasid Minister Ibn Muqla , Then, by the famous Abbasid calligrapher Ibn Al-Bawab and subsequently by the great calligraphy’s master Yagout Al-Mustasemi at the end of Abbasids era. In the beginning of the Othmani Era came Sheik Hamd Allah Al-Amasy who elevated this script to its limitless beauty to become the first founder of this script in the Othmani era. His approach was followed by Al-Hafez Othman, the handwriter of the Holy Quran, Mahmoud Jalal Al-Deen, Mustafa Izzat and Mohammad Shawki. Those calligraphers were the elite Othmani Nasik handwriters.

Is the most well-known Script among the other six Arabic Calligraphy Scripts it was derived from Nasik Script the first calligrapher who standardized the rules of Thulth script was the Abbasid Minister ibn Muqla in the fourth Hijri century.

Then came Yagout Al-Mustasemi who added his significant touches thereto and consequently deserved to be the mentor for all calligraphers in his time. Then came the first Othmani Calligraphy’s Imam (Sheik Hamd Allah Al-Amasy) who established his distinguished approach in handwriting this script to pave the way for other Othmani calligraphers to follow his approach particularly Hafez Othman, Mahmoud Jalal Al-Deen and the genius Mustafa Raqim who also put his touches and established a concrete style followed by all later calligraphers such as: Mustafa Izzat and Abdullah Al-Zuhdi, the handwriter of the two Holy Shrines, and Mohammad Shafiq, the handwriter of the Dome of the Rock.

Is one of the authenticated Arabic Scripts Its name was taken from the practice of the calligraphy’s masters when they used to grant their certificates (Ijazza) to their students Moreover, Ijazza, in this context, is like the school certificate. It was also called Signature Script to refer to the signee of the certificate or to the one who grants certificates.

This Script was standardized by Yousef Al-Shajari who called it (the Presidential Script) because it was used frequently by Al-Fadel Bin Abbas, the Minister of Abbasid Caliphate (Al-Mamooun). Al-Fadel Bin Abbas was also known as the owner of two presidential positions.

This script was named to refer to the Sultani, Governmental and Official Courts during the Othmani Caliphate. It was standardized by Ibrahim Muneef, during the Era of Sultan Mohammad Al-Fatih (AKA Mohammad the Conqueror). This script is derived from Taleeq Script. It was developed by the Minister Calligrapher Ahmed Shala Basha and the Othmani calligrapher Mohammad Izzat. Since then, most calligraphers have been following the method of these two calligraphy’s masters in handwriting this script.

It is one of the six scripts that had been known at Abbasids. Ibn Muqlah had the great role in developing descent and correct rules of letters. This script is derived from Thuluth, and characterized with flowing letters (Raa, Meem and Waw), and does not accept to be combined on the line. The most famous calligraphers who used this style were Abbasid Yaqoot al-Mustasemi, Ahmad Qara Hasari and Hamdullah Al Amassi.

It is a combination of Nasikh and Taleeq script styles. It is beautiful in relevance between tenderness and thickness in characters. Its rules were developed by Mir Ali Sultan Al-Tabrizi In the eighth century AH. The most famous calligrapher that used it was Emad Al-Hasani Al-Qazwini.

This script is derived from Taleeq Script. It has the same features and shapes of Dewani script with a distinguished difference in using a lot of decorative marks thereon. This script appeared in the tenth Hijri century and was developed by the Minister Calligrapher Ahmed Shala Basha. It was used by the most famous calligraphers such as: Mohammad Shafiq, Mohammad Izzat, Sami Afandi, Ismail Haqi and Hamid Al-Amidi.

Tughra refers to the signature of the Othmani Sultan placed on the top of sultani decrees. It was first used by Sultan Murad the third. Tughra is a mix between Dewani and Ijazza scripts and could be also used on Islamic coins. It was developed by Mustafa Raqim, Sami Afandi and Ismail Haqi, who also known as Tughraish. 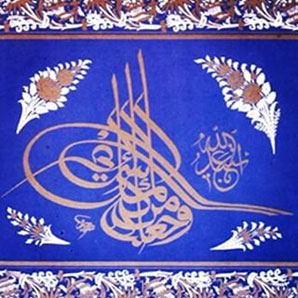 This script is the fastest and the easiest handwritten script. It was used in Sultani Courts and among ordinary people due to its simplicity. Moreover, it was widely used during the Othmani State. It was standardized by Mumtaz Bey, the teacher of calligraphy for the Othmani Sultan Abdel Majeed Khan, 1863. This script was mastered by Mohammad Izzat who also composed a manuscript for different types of Arabic Scripts. Moreover, this manuscript is considered a very valuable reference for Ruqqaa Script.