The ancient arts in Mesopotamia represent a form of art that is considered one of the oldest in historical times. The influence of society is evident in this style, as it was the patron of art, especially from kings and clergy. The style of the Mesopotamian civilization, like other general styles, is subdivided into the following sub-styles: Sumerian, Akkadian- Babylonian, Assyrian, Chaldean, or new Babylonian. The art of Mesopotamia has had impressive effects in various fields, from urban planning, architecture, sculpture, photography, and applied arts.

Arts in the Sumerian civilization

The Sumerian civilization of ancient civilizations known in southern Mesopotamia and has known history of shingles blog cuneiform and Sumer name appears at the beginning of the third millennium b.c. in the Hittite period but the beginning of the Sumerians was in the sixth Millennium b.c., where alabidien people settled in southern Iraq and built the main Sumerian cities Kaur wenibor welarsa and wekish wekolab warido waizin coolness and etiquette (City), Mingled with the ‘ ubaydis the people of Sham and Arabian Peninsula through migration or wars, A year later 3250 b.c. and was their own invented writing on clay is clay tablets scripts (see cuneiform), Sumerian writing 2000 remained the language of communication between the Middle East countries. Regarding the Sumerian art, famous for making statues and sculptures and stereoscopic and engravings from various gems and linked to nature and the daily events at the skill and artistic creation to the Sumerians and Sumerian seals (cylindrical) small in size and containing different pictures and pictures of battles and ornate architecture and music excellence by using several instruments such as the drum and the flute and Bell and trumpet and mandolin and flutes and harp, For signs of significant technical progress which characterized the Sumerian thought three Millennium BC.

The Sumerian civilization of the ancient civilizations known in southern Mesopotamia has known its history of clay tablets written in cuneiform script and appeared Sumer at the beginning of the third millennium BC. In the period of the emergence of the Hittites, but the beginning of the Sumerians was in the sixth millennium BC. , Where the people of the Ubaidis settled in southern Iraq and built the major Sumerian cities like Ur, Nippur, Larsa, Lagash, Kolab, Kish, Eizen, Eridu and Adab (city).

The Abidians mixed with the people of Sham and the Arabian Peninsula through migration or war, and after 3250 BC. , And they invented clay scripts, clay tablets. Sumerian writing for two thousand years was the language of communication between the countries of the Middle East at the time.

As for the Sumerian art, it was famous for the sculpture and engraving of the various gems and their connection to nature and everyday events. The skill and artistic creativity of the Sumerians and small Sumerian seals in size, which contained various images, pictures of battles drawn and decorative architecture and musical excellence using many instruments such as drum and flute Bell, trumpet, lute, flute, and harp … were indications of the great artistic progress that characterized the Sumerian thought in the third millennium BC.

The civilization of ancient Sumer is characterized by a set of physical antiquities, public buildings like temples and palaces. Undoubtedly, emergence of palaces in this era has historical significance on the emergency of the ruling dynasty. At the same time, the temples maintained their basic format in general however expanded their layouts and sizes; in addition names of certain divine turned out and dedicated for worship. Buildings of the era may be identified from Plano – convex a special type of bricks used only by Mesopotamia. Perhaps the prime example of Ziggurat architecture is the main temple (Ziggurat of Ur) which was dedicated for worshipping the King of the Gods of Sumer (AN) and (ENANA) goodness of fertility in Uruk city on 12 m hardstand above the ground where he settled there above and later known as White Temple due to the gypsum coated facade.

Arts in the Babylonian civilization

The Babylonian country means the Akkadian (Gate of God); Babylonian civilization emerged between the 18th century BC. And 6 BC. And the center of this region is the city of Babylon, which passed during the periods of existence of many peoples and rulers and was based on agriculture.

King Hammurabi was the founder of Babylon in 1763 BC. The greatest of its kings was Hammurabi (d. 1750 BC). He was known for his collection of laws. Shortly after Hammurabi, this empire weakened and flourished again and expanded to include Palestine and the Egyptian border.

In the period that the Chaldeans ruled Babylon from 625 BC, the Babylonian Empire was called the “Second Babylonian Empire” at this stage. Nebuchadnezzar was the greatest king of Babylon (605-562 BC) in her new era, Surrounded by huge walls with wide doors. Babylonian civilization is one of the greatest ancient civilizations. It has made significant achievements in astronomy, mathematics, medicine and music.

Architecture of Civilization of Babylon

The constructional materials used in architecture of ancient Babylon are similar to those used in ancient civilization of Sumer due to the geographical nature of south central Mesopotamia and due to the absence of mountains. Sand was the basic constructional material due to the broad abundance of the material from which bricks were made. Ishtar Gate is the most beautiful architectural monument of ancient Babylon. It is 12 m high made of glazed baked colored bricks. Its façade of both walls are prominent sculpture portraying kinds of mythical creatures that symbolize the King of gods of Babylon (Marduk). 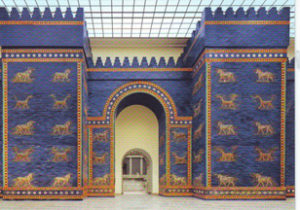 Among the important architectural constructions that witnessed the ancient Babylon era is Tower of Babel composed of seven storey and area of each storey becomes lesser as you go up. The seventh flat is composed of the Holy Temple in which the Babylon year’s eve is held in light of a document known as (I- Sakla) panel found in UR the main source of accurate information about Tower of Babel. It is worth mentioning that the milestones of the monument demised and transformed to rubbles. 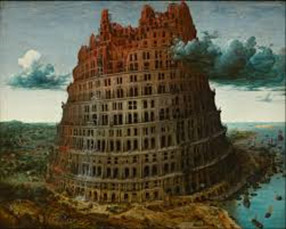 Arts in the Assyrian civilization

The Assyrians lived in northern Iraq since the third millennium BC and were waiting for the opportunity to independence in their cities from the rule of the south, where they were subject before their independence to the Kingdom of Akkadian, and then they were submit to the kutia , and then to the kings of the third Orr, which continued during the period from 2113 2006 BC, After that, they succeeded in the emergence of Hammurabi king of Babylon, who ruled during the period of 1792-1750 to eliminate those people who opposed them. The skirmishes continued between the north and the south for a period of time. The south extended its control over the north, in another period; until the state was able The Assyrian Empire extended its strong influence over large areas of the south, extending its influence to the countries of Babylon and Assyria.

It was the first country to be established in northern Mesopotamia and expanded in the second millennium BC. And extended north to the cities of Nineveh, Nimrod and Khorsabad and the Kingdom of Assyria was a military state based on slaves, And between 883 BC. And 612 BC. It established an empire from the Nile to the Caucasus, and its great kings: Ashurbanipal, Tilgat of the Third Fleischer, Sargon II, Sennacherib, Ashuranasarbal, and Sherehadon (the father of Assyria Banipal).

The books of the Assyrians were the cuneiform writing on clay tablets, and the most famous of them were the Gilgamesh Epiphany, where the flood was first reported. Their science was linked to agriculture and Sumerian numerology. The library of King Ashur Panipal was one of the most famous libraries in the ancient world. The libraries of his country, the Assyrians are Akkadian who grew up in the northern region of the Tigris River basin, after emigrating from Babylon during the Akkadian era. The Assyrians mixed with the mountain peoples of the Hittites and Hauris and enslaved the Arameans and Arab tribes.

In 616 BC, the ruler of Babylon and the founder of the modern Babylonian state (Nabo Blaasser 625-606 BC) and with the help of the Medes, Assyria was subjugated in 614 BC in the reign of the second son of Assyria Banipal, King Sinn Char Oshkin. After another battle, Nineveh was subjugated in 612 BC this was the end of the Assyrian political presence.

The Assyrian civilization had architectural achievements and innovations in the manufacture of statues, especially the winged bull statues that were set up in front of the royal palace, and decorated the walls with engravings of battles and hunting trips; the sculpture was one of the most important arts practiced by the Assyrians. It gave us many models of different ages due to the nature of the materials used for sculpture. These stones are primarily known for their strong resistance to various natural factors and their preservation of their original form and form for a long period of time, Sculptures of human and animal types of different shapes and sizes. The sculpture was prominent and includes sculpting stone tablets and writing on obelisks, monuments and other forms and types of sculpture also or engraving on the ivory or cylindrical or flat seals and drilling also on the Wood and metal working.

The constructional materials used in the architecture of the Assyrian civilization are similar to those used in Mesopotamia civilizations with the exception of the natural stone and good timber were used in building the temples and palaces for broad abundance of the materials in the northern areas. The Assyrian architecture is renowned for constructing large palaces. Remains of the palaces are signs of magnitude and expansion. The Assyrian palace is divided into several sections and wings. Some of the wings are allotted for men and others for the ruling affairs while the third wings are allotted to women. The palace furthermore contains a special section for the kitchen, wings for servants. Among the most important architectural constructions built in the Assyrian era has been the King Sargon II Complex in (Dor Sharkin) in the vicinity of Ninawa which was constructed in 713-707 BC.

Arts in the Akkadian civilization

The Akkadian civilization between 2350 to 2200 BC. The Akkadian are the oldest of the Semitic tribes that settled in the Delta of Mesopotamia and lived since the oldest covenants with the Sumerians non-Semites side by side, Then they came to power in 2350 BC led by (Sargon Akkadi). Akkadian civilization is an empire set up by Sargon Akkadi in the city of Akkadian, and taken as the capital of his state, and the city of Akkadian is located on the West Bank of the Euphrates River between Zamir and Kish, has imposed its sovereignty over all the cities of Mesopotamia and extended its influence on the countries of Elam and Syria and Anatolia south to the Arabian Gulf in one kingdom During his reign of about 55 years (2334 to 2279 BC).

During his rule, he introduced many reforms to the system of government, army, and architecture. Among the most famous kings of this civilization were Sargon Akkadi (2334 – 2279 BC), Nram Sun (2260 – 2223 BC), Sharkalisharri (2223 – 2198 BC) , The manifestations of art in Akkadian civilization are less clear than their political history, which is linked to two causes: first, the nature of the central ruling, and the ruling class’s dependence on the sources that the sources give to their history. Second, the scarcity of physical and written resources discovered, and the survival of the Akkadian capital is unknown. However, some of the works of Akkadian sculpture are influenced by Sumerian art in terms of dividing scenes into fields, pattern of clothes, symbolic content.