Art historians generally define Ancient Greek art as the art produced in the Greek-speaking world from about 1000 BC to about 100 BC, They generally exclude the art of the Mycenaean and Minoan civilizations, which flourished from about 1500 to about 1200 BC, Despite the fact that these were Greek-speaking cultures, there is little or no continuity between the art of these civilizations and later Greek art.

At the other end of the time-scale, art historians generally hold that Ancient Greek art as a distinct culture ended with the establishment of Roman rule over the Greek-speaking world in about 100 BC.

After this date they argue, Greco-Roman art, though often impressive in scale, was largely derivative of earlier Greek models, and declined steadily in quality until the advent of Christianity brought the classical tradition to an end in the 5th century AD.

There is also a question relating to the word “art” in Ancient Greece? The Ancient Greek word ‘tekhni‘, which is commonly translated as “art,” more accurately means “skill” or “craftsmanship” (the English word “technique” derives from it), Greek painters and sculptors were craftsmen who learned their trade as apprentices, often being apprenticed to their fathers, and who were then hired by wealthy patrons, Although some became well-known and much admired, they were not in the same social position as poets or dramatists, It was not until the Hellenistic period (after about 320 BC) that “the artist” as a social category began to be recognized.

Greek pottery can be split into two categories: figurines and useful vessels, you can tell a vessel’s use from its shape, or at least historians do their best to do so. Agreed upon uses and shapes include (though aren’t limited to) amphora for storage or transport, krater as a mixing vessel, kylix or cups, and aryballos for perfume.

While some pieces are incredibly plain, others are intricate in their painted decorations. These decorations developed over quite a bit of time, from protogeometric style (1050–900 BCE), with its minimal design, to geometric style (900–770 BCE), with its collection of triangles, which was used all over vessels, After geometric came orientalizing style (725–625 BCE) thanks to influence from Asia Minor, Animals, mythical and real, joined painted motifs around the middle of vessels.

As in the development of pottery, the Greeks ultimately focused on great figurative works in their sculpture. Additionally, sculpture was produced for a variety of reasons including art, public memorials, offerings in temples, and more, The history of sculpture split into three stages: Archaic, Classical, and Hellenistic.

Possibly inspired by Egypt and Mesopotamia, these figurative works were carved in stone, The most common subjects were nude standing youths, a girl draped in cloth, and a sitting woman, While rough in terms of accuracy compared to later works, even these figures show off a greater understanding of anatomy than other eras at this point in history, As with other cultures, a lot of works were intertwined with religious figures.

Since their gods were mostly human-looking, sculptures could focus on the human body in great detail without the idea of focusing on humanity as a subject for art as being in conflict with ideas about worship, that sort of attitude will be seen in other cultures. 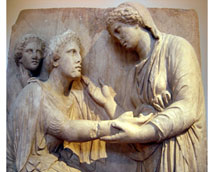 Relief sculptures decorated the outer walls of temples during this time, though a lot of these pieces have been lost, and only fragments remain. Another interesting development is the personalization of funerary sculptures, previously they were rather rigid and generic during the archaic period, but they now featured real people, usually the deceased and family members, and its changes like this that, along with the focus on realism, shows how humanistic the classical period grew to be.

The Jockey of Artemision is a great example of this, the horse is in motion and the child, seated on its back, is leaning forward. It’s as if they’re frozen in time rather than being a sculpture. 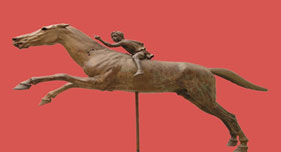 Greece’s architecture is traditionally divided into three periods: Archaic (c.650-480 BCE); Classical (c.480-323 BCE) and Hellenistic (c.323-27 BCE), Greek building art offered the first clear, strong expression of a rational, national architectural creed, Greek architects provided some of the finest and most distinctive buildings in the entire Ancient World and some of their structures, such as temples, theatres, and stadia.

The Greeks certainly had a preference for marble, at least for their public buildings, Initially, though, wood would have been used for not only such basic architectural elements as columns but the entire buildings themselves, Early 8th century BCE temples were so constructed and had thatch roofs, From the late 7th century BCE, temples, in particular, slowly began to be converted into more durable stone edifices; some even had a mix of the two materials, Some scholars have argued that certain decorative features of stone column capitals and elements of the entablature evolved from the skills of the carpenter displayed in more ancient, wooden architectural elements.

The stone of choice was either limestone protected by a layer of marble dust stucco or even better, pure white marble, also, carved stone was often polished with chamois to provide resistance to water and give a bright finish, the best marble came from Naxos, Paros, and Mount Pentelikon near Athens. 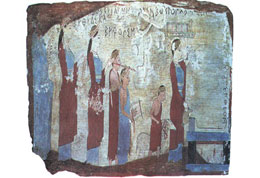 Greeks also used tiles and rocks of different colors to create floor mosaics, one mosaic found at Olynthus reportedly cost 3,500 drachmas or the equivalent of ten years of wages for the average worker, Because of the great expense, mosaic floors were only used by the wealthiest of Greeks. 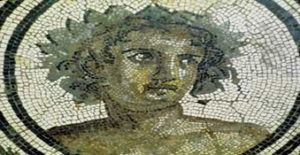 Descriptions of panel paintings and their creators are noted in literature of the time. One set of panels, the Pitsa tablets, did survive, showing the artistic skills of the archaic period. The panels are wooden boards painted over in stucco with figures painted in mineral pigments. They show religious scenes centered on nymphs, Wall paintings were used on buildings and as grave decorations.

At the end, from pottery to sculpture to architecture and culture in general, a great deal of Ancient Greece influenced history. It’s quite notable in its influence of Ancient Rome.

The Greek Art of the body 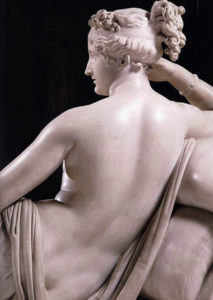 Many of the beautiful works of art that have appeared throughout history contain depictions of naked human bodies. It seems that nudity is often used as a symbol, and can represent various aspects of man, such as beauty, fragility, shame and power, not just for sex or sensational excitement.

Ancient Greek vases, for example, often depicted naked or half-naked figures around their surroundings. The warriors often depicted naked to show their strength and hardihood. It is certainly impossible to imagine that the Greek warriors would go into battle without clothes. There is some evidence that the Greeks were competing in sporting events naked. They may have been doing this as a mean of displaying their physical strength and intimidating their adversaries and rivals. 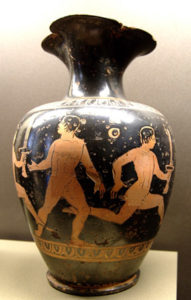 In Greek art, the dead warrior was usually depicted naked, perhaps to indicate the weakness of the human body. The workers were also depicted in Greek artworks naked, to highlight their muscles and stress the effort they make while performing their physical activities. The gods and goddesses were also painted naked in order to prove their godhead. It is interesting to note that the nudity of women in Greek art was not permitted until the eighth century BC. 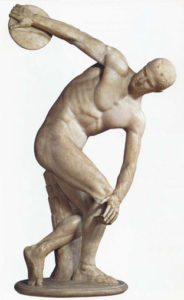 The naked human body has been a favorite subject for artists because of its beauty and meaning. The emergence of Christianity led to a breakthrough in the development of nude art. Some of the works of art that emerged in the Middle Ages and the Renaissance depicted Madonna’s briast naked as she nursed her child. There is a possibility that this has become permissible because of the holiness of the subject. Images of naked Adam and Eve also appeared as a literal translation of the story of their fall from the havens of Eden. Often, Christ painted naked on the cross, to show man’s physical suffering.

The concept of the ideal female body dates back to Plato and Aristotle, according to Kenneth Clark in his bare book: A Study in the Ideal Form , and Helen McDonnell in her book The Sensory Consonants: The Naked Female in Painting . According to Clark, Aristotle believed that “everything has an ideal form, and that what we consider a reality is actually a shadow of what is ideal.” This was reflected in art from the Greeks, although the image of the naked female in art did not appear until around the fifth century AD, because religious and social structures were preventing it. The naked women in the old art, according to Clarke, were comic and not perfect, and sometimes did not look human like.

The current concept of nudity in art dates back to the ancient Greek sculptures of nude male athletes in the fifth century BC. The ideal characters of sculptures are attributed to the common belief that Apollo, the God of justice, represented the ideal male model. His female equivalents were Aphrodite in Greece, or Venus in Rome, the goddess of love and beauty. While males in ancient Greek art were known for their power and portrayed, according to Clark, “in a state of alertness and trust,” females were generally seen as decent weak.

The female form full of nudity in art was very rare in ancient Greece. So one must look for naked women who wear little clothes. One, perhaps most famous, is Venus de Mello , depicting a half-naked woman.”

The main model among these statues is the young sporting statue of Kouros The forefoot is fixed. As The left foot advances forward and the arms are tight to the sides. They are bent at the elbow sometimes and the hands are either held (and still have a piece of stone) or open and released. The proportions used in the manufacture of these statues are the same proportions as shown in the statues with broad shoulders and thin high waist.

On the other hand appears the statues of the standing girl “Kore” this period, her body is covered with a dress with no folds attached to the body. Another popular style used in the Erkhy? Era is the statue that sits either male or female.