Ancient Egyptian art is five thousand years old. It emerged and took shape in the ancient Egypt, the civilization of the Nile Valley, Expressed in paintings and sculptures, it was highly symbolic and fascinating – this art form revolves round the past and was intended to keep history alive.

Ancient Egyptian art forms are characterized by regularity and detailed depiction of human beings and the nature, and, were intended to provide company to the deceased in the other world.

The Egyptian style of visual art, like that of many cultures, features generic human figures that all look essentially the same, A stylized ideal of the human figure developed early among the Egyptians, with body parts sized according to standard proportions, The poses of these figures are so rigid that scenes from Egyptian art have little sense of movement, In Egyptian architecture and sculpture, a similar impression of timeless stability is achieved through rugged, heavy material (mostly stone) and sheer mass.

The Societies of Pharaonic Civilization

Egypt lived in the days of Pharaonic civilization in a class society in a tangible way, where social groups have a very important role in granting the person entity and status, and the section of society as follows:

The Pharaoh is at the head of the legal system in a formal manner, and he has the responsibility of enacting laws and legislations, and of justice. His duties are to maintain law and order. He was known at the time as the god Maat. The old Egyptian was based on an overview of the sense of right and wrong, and it imposed and strongly emphasized the need to achieve peaceful settlements and the complete withdrawal from conflicts and conflicts. The country has known what is known as the Senate as the local Senate for the resolution of disputes. Just around the corner there were some penalties for minor offenses; namely the imposition of fines, exile and distortion in the face and the other, according to the size of the crime committed.

The achievements of Pharaonic civilization

Among the most prominent achievements of the Pharaonic civilization: The interest of the Pharaonic civilization in the artistic field was manifested in the following: In general, Egyptian architectural designs were monumental but not architecturally complex: they used posts and lintels, not arches, although Egyptian stone masons had a strong influence on later Greek sculpture and architecture. The lack of wood was balanced by an abundance of sun-baked mud bricks, and stone (mostly limestone, but also granite and sandstone), although most major structures had to be built near the Nile, as building materials were transported by river, Stone was first introduced during the era of the Old Kingdom (2686-2181), initially only for tombs and temples, and architectural sculpture, Bricks were used for everything else, including royal palaces, fortified buildings, temple walls and outbuildings, as well as municipal and other civic complexes, Most famous Egyptian architecture was completed during two periods: the Old Kingdom (2686-2181) (mostly pyramids) and the New Kingdom (1550-1069) (mostly temples).

During old kingdom period, stone was first used in the construction of monumental buildings, Huge pyramids containing burial chambers of dynastic Pharaohs were surrounded by a complex of tombs and temples, Egyptian nobles and senior officials were interred in nearby rectangular structures called mastabas, Pyramid architecture reached a highpoint at Giza, Dashur and Saqqara, Famous Old Kingdom pyramids included the Great Pyramid of Khufu at Giza, the Step Pyramid of Djoser, the Sloped Pyramid of Snefru , the Red Pyramid of Snefru and the Pyramid of Teti , Pyramid interiors were often decorated with statues and other types of stone sculpture, as well as mural paintings, Another huge Old Kingdom structure was the Great Sphinx of Giza.

The Egyptians embraced sculpture on a colossal scale. The extreme case is the Sphinx (a lion-human hybrid), carved from exposed bedrock. Like most structures at Giza, the Sphinx dates to the Old Kingdom period.

Representation of three dimensional forms dominated the character and style of the art of ancient Egypt. Completeness and exactness were preferred to prettiness and cosmetic representation.

Because of the highly religious nature of Ancient Egyptian civilization, many of the great works of Ancient Egypt depict gods, goddesses, and Pharaohs, who were also considered divine; Ancient Egyptian art is characterized by the idea of order, Clear and simple lines combined with simple shapes and flat areas of color helped to create a sense of order and balance in the art of ancient Egypt

Ancient Egyptian artists used vertical and horizontal reference lines in order to maintain the correct proportions in their work, Political and religious, as well as artistic order was also maintained in Egyptian art, In order to clearly define the social hierarchy of a situation, figures were drawn to sizes based not on their distance from the painter’s point of view but on relative importance, For instance, the Pharaoh would be drawn as the largest figure in a painting no matter where he was situated, and a greater God would be drawn larger than a lesser god

Of the materials used by the Egyptian sculptors, we find – clay, wood, metal, ivory, and stone – stone was the most plentiful and permanent, available in a wide variety of colors and hardness. Sculpture was often painted in vivid hues as well. Egyptian sculpture has two qualities that are distinctive; it can be characterized as cubic and frontal. It nearly always echoes in its form the shape of the stone cube or block from which it was fashioned, partly because it was an image conceived from four viewpoints. The front of almost every statue is the most important part and the figure sits or stands facing strictly to the front. This suggests to the modern viewer that the ancient artist was unable to create a naturalistic representation, but it is clear that this was not the intention 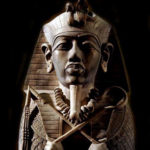 Symbolism also played an important role in establishing a sense of order. Symbolism, ranging from the Pharaoh’s regalia (symbolizing his power to maintain order) to the individual symbols of Egyptian gods and goddesses, was omnipresent in Egyptian art. Animals were usually also highly symbolic figures in Egyptian art. Color, as well, had extended meaning – Blue and green represented the Nile and life; yellow stood for the sun god; and red represented power and vitality. The colors in Egyptian artifacts have survived extremely well over the centuries because of Egypt’s dry climate.

The word paper is derived from “papyrus“, a plant which was cultivated in the Nile delta, Papyrus sheets were derived after processing the papyrus plant, and some rolls of papyrus discovered are lengthy, up to 10 meters. 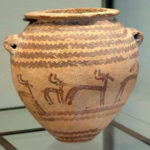 Ancient Egyptians used steatite (some varieties were called soapstone) and carved small pieces of vases, amulets, images of deities, of animals and several other objects, Ancient Egyptian artists also discovered the art of covering pottery with enamel, Covering by enamel was also applied to some stone works. 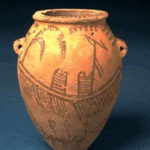 The vessel illustrated here is typical of the Naqada II period, being decorated in red line on a light background. The elaborate motifs relate in part to life on the Nile, and show oared boats, water plants, standards, and birds. Other examples also include wild animals and male or female figures. Such vessels were probably made specifically for burial, rather than for everyday use.

A hieroglyphic script is one consisting of a variety of pictures and symbols. Some of symbols had independent meanings, whereas some of such symbols were used in combinations. In addition, some hieroglyphs were used phonetically, in a similar fashion to the Roman alphabet. Some symbols also conveyed multiple meanings, like the legs meant to walk, to run, to go and to come. The script was written in three directions: from top to bottom, from left to right, and from right to left, this style of writing continued to be used by the ancient Egyptians for nearly 3500 years, from 3300 BC till the third century AD.

Many art works of the period contain hieroglyphs and hieroglyphs themselves constitute an amazing part of ancient Egyptian arts, Knowledge of hieroglyphic script was lost after it was superseded by other scripts, the script was decrypted by Champollion who studied the Rosetta stone for 14 years and discovered the key.

Egyptians created paintings to make the afterlife of the deceased a pleasant place, accordingly, beautiful paintings were created; Tomb Paintings show activities that the deceased were involved in when they were alive and wished to carry on doing for eternity.

Canopic jars were used by the Ancient Egyptians during the mummification process to store and preserve the viscera of their owner for the afterlife; they were commonly either carved from limestone or were made of pottery.

Ancient inscriptions that belong to the Pharonic Egypt confirm that ancient Egypt had witnessed extraordinary phenomena represented in perfectly-finished musical instruments which were made since the beginning of times.